I Believe In Fairytales Too

It’s almost impossible to believe that it was just one year ago since ‘The Great Escape’. My memories of the day in Torquay are a bit fuzzy. I’d been DJing in London the night before and got home at 4am, but felt so odd about the game I didn’t sleep a wink and arrived at Plainmoor driven by nervous energy and adrenalin (and some fish & chips). History was made and I’m pretty sure I could have run all the way back to London afterwards. That day has certainly been the catalyst in reviving the club’s fortunes. And now we all find ourselves on the eve of another potentially monumental day in the history of Wycombe Wanderers. Whatever happens against Northampton Town, at Prenton Park and The Globe Arena, this season has already been a fairytale in itself. When the final whistle blew against Morecambe and the other results were confirmed, I must admit to having a pang of disappointment to see The Chairboys cruelly slip out of the top three for the first time since September. However, two short post match interviews with Gareth Ainsworth later and the realisation of just how far the whole club has come in the last twelve months sunk in. He is a truly inspirational bloke, even when the dice was heavily loaded against him whilst having to learn the harsh lessons of management under the microscope of a relegation battle, Gareth remained positive. So can lightening strike twice? History dictates that you would be unwise to bet against it. Even if automatic promotion is a fairytale too far, the safety net of the play-offs is a touch more comforting than the Vanarama Conference and financial oblivion. Here are the thoughts of Gareth Ainsworth, talking to me for BBC3CR ahead of the game… For mobile & tablet version click here I also spoke with Matt Ingram… For mobile & tablet version click here Also, to get some insight into the camp of Southend United as they are in the box seat going into the final day, I spoke with my good friend and journalist, Brian Jeeves. For mobile & tablet version click here For those of you who didn’t get a ticket or will not be on the hill at Sixfields tomorrow, the game will be live on BBC Three Counties 98FM and on Chairboys Player around the world with myself and Scotty. #COYB! 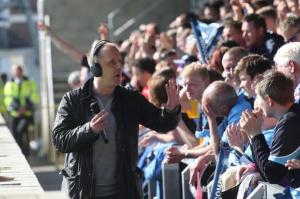 JUST five minutes to go… Imagine going into injury time back in the top three against Northampton…!